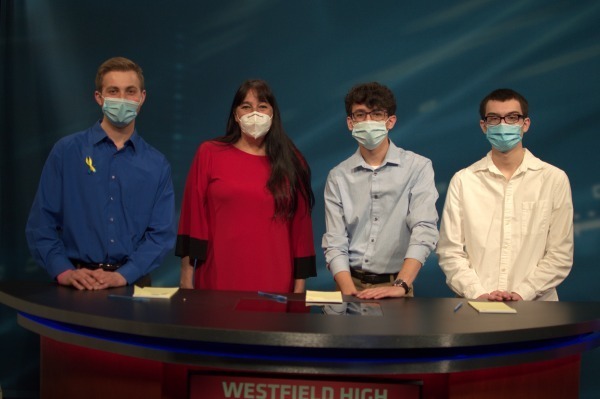 Students from Westfield High School made the short drive to the Westfield State University television studio March 19 to compete in an episode of “As Schools Match Wits” against Mount Greylock Regional High School.

The match was one of several episodes filmed over the weekend and will air on April 16 at 7 p.m. on New England Public Media’s WGBY television, Channel 57.

Following the match, team coach Kate Pawul said that she was proud of her students and was happy to see some of the training methods they had worked on employed in real time.

“Every strategy we worked on, the kids employed,” said Pawul.

She said she hopes to gather the team to watch the episode together when it airs on April 16.
Janusz joked afterwards that they got more literature questions than they had wanted, as ty think of literature as their weakest category for the show. When it came to social studies and historical events, Janusz said that they were all quite prepared.

The students said they prepared by watching some of the recent episodes to get a sense of the breakdown of different educational categories they might face. O’Sullivan and Gelinas were first timers for the Westfield High School team, but Janusz has been on the team for several years, with this being his last appearance before he graduates.