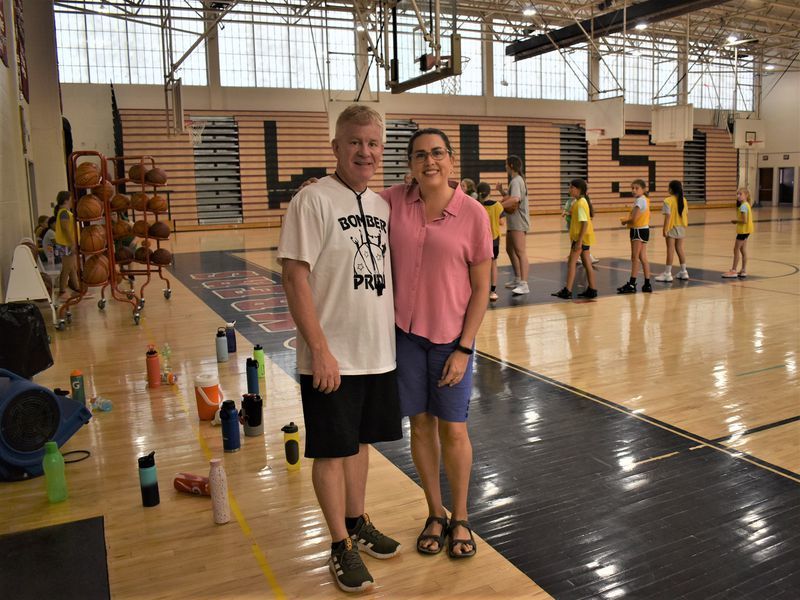 A special reunion took place at Westfield High School on July 15, when Rebecca “Becky” Friedman of Fair Oaks, California, accompanied by her husband Angel Verdugo Mondragon, and Maria Eugenia Torres of Uruguay, accompanied by her daughter Victoria Benitez, visited the high school for the first time since they both graduated in 1996.

Torres was an exchange student from Uruguay in 1995-96, hosted by the Baldwin family, when she met and befriended Friedman, a friendship that has lasted through the years. Four years ago, Friedman visited Torres in Uruguay.

“Since meeting Maria, I went on to be an exchange student myself. I remain close with my host family and have written for the local paper in my host community (Rotorua, New Zealand) about my experience. I have been a volunteer with the exchange student program for over 20 years and served on the national board for a number of years. Being an exchange student was a foundational experience for me, and I know Maria feels the same,” Friedman said.

Torres has also remained in touch with the Baldwin family, with whom she is staying during her visit. She said when she first arrived this week, “we all cried.” She said as an only child, she was given the opportunity to live with a big family of four kids and become a part of the family, with her own chores.

On her way to Westfield, she visited both Laura Baldwin, who was her own age, in New York, and also Laura’s brother Joe Baldwin in Great Barrington.

Torres said while in Westfield the past few days, she had visited Stanley Park, the Westfield Athenaeum, and the post office, all of which were important to her as an exchange student.

With Friedman they had gone to Circuit Coffee. She said it’s nice the way the city is fixing up the downtown.

On Friday, WHS Assistant Principal Julie Schortmann gave the two women a tour of the high school. Everyone said the high school hasn’t changed much in the past 26 years. Friedman even wondered whether her combination might still open her locker but didn’t try it because summer classes were in session on the third floor where her locker used to be.

Schortmann, who graduated a few years after them, asked whether they remembered history teacher Bill Daley, who was in the gymnasium teaching a youth basketball camp. Both women were delighted to hear his name, and both remembered him well.

At the gym, Daley was called over and remembered both of his former students immediately, as 1996 was his second year as a teacher. Torres told him she remembered him as “a really funny teacher who danced a lot.”

Asked whether her school in Uruguay is bigger or smaller than WHS, Victoria Benitez, who is 15 and in 10th grade in Uruguay, said her school is much smaller, with only 400 students in the primary and secondary school combined.

Walking through the empty cafeteria, Torres, who has a technical career in information technology, remembered the senior luau and dances that were held there. She, Friedman and Schortmann stopped to look at photographs on the walls, and stood in front of the Bronze Tablet, where they recognized a few names. Emily Baldwin was the Bronze Tablet winner in 2000.

The two friends reminisced about Ingrid Waalen, the other exchange student that year, who came from Norway. After they met in Westfield, she visited Torres in Uruguay twice, and Friedman visited her in Norway.

Friedman, who has volunteered with exchange students for many years, said the program gives you a perspective outside of your own country and forces you to adapt.

“It’s been the basis of some lifelong connections for me,” she said.