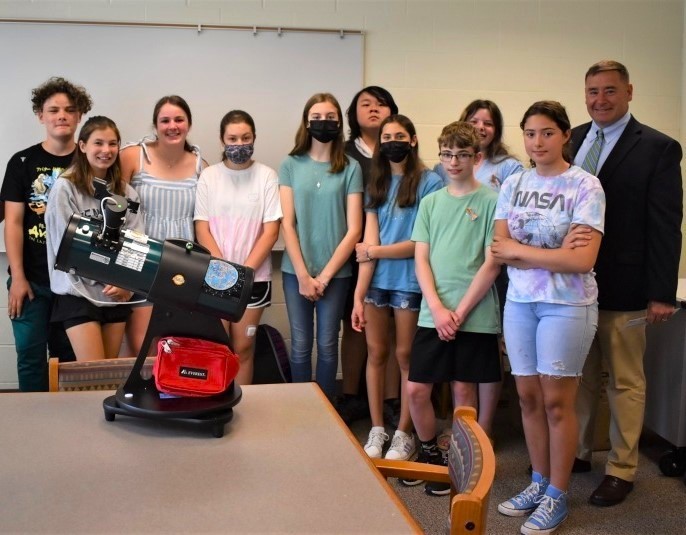 Kaitlynn Goulette, 14, who will be entering ninth grade at Westfield High School in the fall, has a vision that reaches to the stars. She has a passion for astronomy, and now she would like to see a telescope and an astronomy club in every school in Westfield.

Goulette’s interest in astronomy began before she went to grade school. “It was a family thing,” she said. The family made regular visits to the planetarium at the Springfield Science Museum, where she soon joined their club “Stars over Springfield” with her father Don Goulette and two younger sisters. She said they have a 20-inch research-grade telescope at the museum.

She also grew up watching astrophysicist Neil deGrasse Tyson and had the opportunity to meet him once when she was 6 years old and a student at Munger Hill Elementary School. Her father brought her to a conference at Holy Cross College in Worcester where Tyson was speaking. When she raised her hand to ask him a question, he had a conversation with her that went viral on video, recording more than a million views.

Six-year-old Kaitlynn asked him “how can first graders help the earth?” He encouraged her to play with pots and pans and jump in the mud in the name of scientific inquiry.

“Just tell your parents that these are experiments, and you want to become a scientist, and they won’t stop you from doing anything you want,” Tyson told her.

Her enthusiasm hasn’t waned. When she was in Westfield Intermediate School, she started an astronomy club and began her newsletter, Starry Scoop, which she still writes monthly. The July issue is posted on Facebook, with columns including “What’s Up,” “Observations,” “Object of the Month,” and a map of the July sky.

Because of the COVID-19 interruptions, it took Goulette until her second year at Westfield Middle School to get an astronomy club going there. In October 2021, they held a Star Party in the school parking lot and brought telescopes. Of the dozen or so members in the club this past year, only two said they were previously interested in astronomy, and now everybody is on board. Four of the club members said they have telescopes at home.

Inspired by the club, Melissa VanHeynigen, a WMS parent and district art teacher at Paper Mill and Highland elementary schools, reached out in November to her father, longtime Westfield resident Robert Gravel, to ask if he might donate the 6-foot telescope that he built to the middle school. He donated two. The school cleaned one and is in the process of refurbishing the other.

The club also offered a viewing in the Walmart parking lot for the public, which raised $400, which they used to donate a telescope to the intermediate school library. Goulette said she hopes students will be able to check the telescope out of the library, and for that purpose ordered a modified telescope with fewer pieces, which are harder to break or lose a piece.

Goulette then reached out to Westfield Gas & Electric for a $500 donation to purchase a similar telescope for the Westfield Middle School library for students to be able to check out and use at home. WG&E General Manager Thomas Flaherty delivered that telescope in June.

Don Goulette said Kaitlynn’s younger sisters are just as passionate about astronomy as she is, but Kaitlynn has taken things into her own hands.

“It gives you a purpose for when you learn algebra and calculus. If you’re an astronomer, you realize that’s how the planets orbit and how you get to the moon,” he said.

He said the family is still heavily involved with the Springfield Science Museum, which just got a large grant to open up to the city of Springfield to do public outreach for astronomy. They also observe sky events at the Arunah Hill Natural Science Center, a dark sky site in Cummington, which Kaitlynn talks about in the current issue of the Starry Scoop.

“We’ve been to so many talks and so many presentations,” Don Goulette said, adding that he would like to see his daughters stay on this path, but it’s worthwhile even if “it only ignites a little bit of passion to take that extra science class in high school, or that extra math class.”

Westfield High School has no astronomy club, but with Kaitlynn Goulette and the majority of the WMS astronomy club members headed there in the fall, it seems likely, even as if it were “written in the stars.”

As Katelynn Goulette likes to say, “We all share the same sky.”