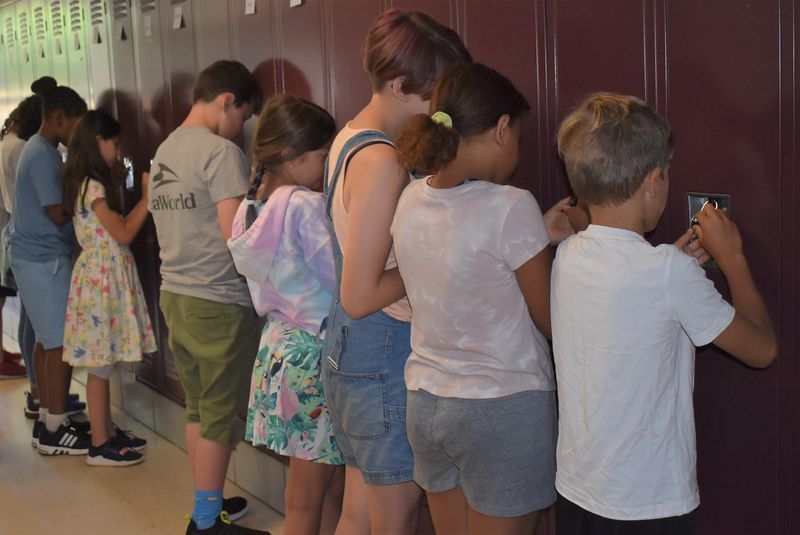 During transition camp at the Westfield Intermediate School at 350 Southampton Road from Aug. 1-4, 125 new students who will be entering fifth grade at the end of the month were learning their way around, with their teachers and experienced sixth and seventh graders there to help welcome and guide them.

STEM math teacher Matthew Wroth, director of the transition camp, said students get to know their new school building, find out where their homerooms will be, and learn about their new schedules. “Schedules are huge,” Wroth said.

Students in fifth grade have a team of two teachers, one teaching science, technology and math (STEM), and one literacy. They also have specials in their schedules, such as art, music, band, chorus, technology and robotics, all with different teachers and in different classrooms.

Students in the transition camp were also being shown where they go for lunch, and where the nurse’s office is located.

Incoming fifth grader Logan Bonavita said he had been confused about how to get around the school, which has approximately 800 students, but he took a tour and now knows his way. Bonavita and classmates were being given the combination locks for their lockers and were practicing how to open them.

New fifth grader Addison Richards said in her class they were talking about putting their cell phones away in their lockers during their classes, and not sharing their locker combinations with other students. Richards was with Emma Masciadrelli, a sixth-grade helper and Math teacher Lori Lyncosky.

“The nice part about the transition program is that some kids that are already in the school are here, who will be familiar when they start school,” said Lyncosky about Masciadrelli.

Also helping out at the camp was now seventh grader Griffin Kuhn.

Incoming fifth grader Haleigh Daley-Brady said she was learning about the combination locks and getting shown around the school, where she was seeing friends, she knows from other schools. “There are friends I do know, and new friends,” she said.

On Aug. 4, the last day of the camp, parents were invited to come for questions and answers.

For anyone who did not participate in the transition program, there will be two more opportunities for students and parents to tour the school, on Aug. 16 at 6 p.m., and on Aug. 23 at 11 a.m. No pre-registration is required to attend.