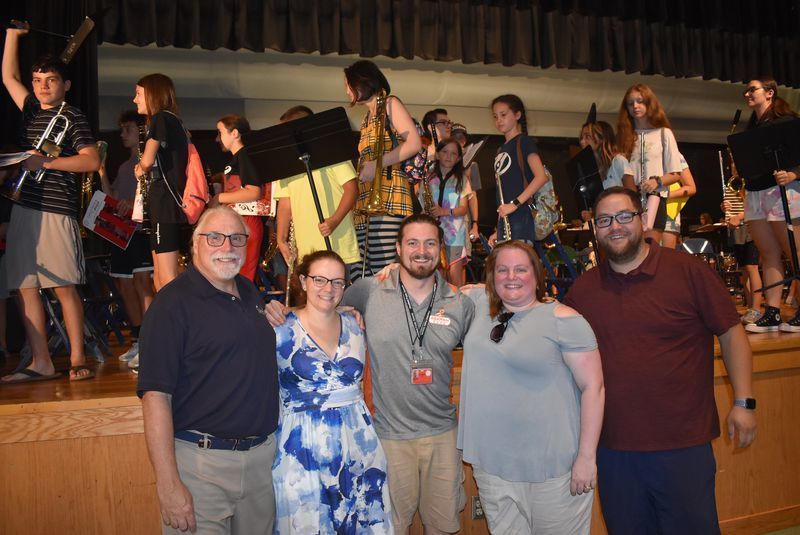 More than a hundred band students going into fifth to 10th grades have benefitted from two weeks of band camp for the second year in a row. All five district band teachers from the elementary through high school level, along with five student mentors, worked with the students in small groups and as an ensemble, giving them invaluable experience.

Kennedy and Choe said the camp keeps the interest going for the youthful musicians over the summer. “They love to play, and June to September is a long time,” Kennedy said.

Kennedy said he was grateful to have the funding for the band camp for a second year. He thanked the Boys & Girls Club for saying yes and getting the camp started last year, where the camp was largely held outdoors behind the club, on South Broad Street. This year, with the excessive heat, Westfield Middle School accommodated musicians inside the band room and the auditorium for practices. Kennedy also thanked the schools’ transition services students and faculty, who were meeting in the auditorium, for sharing their space.

Kennedy said all of the band teachers and mentors have been working with the students as a whole, and also breaking them into small groups according to their instruments. They will come together for a performance on the last day of camp, Friday, Aug. 12, at 10:30 a.m.

“They can play as little or as much of the songs as they’d like to,” Kennedy said. He said the younger musicians pick things up just by being around the older ones.

“For the older kids, it’s a great reminder of ‘how far I’ve come,’” he added, and a great motivator for them to keep going.

Kennedy said it’s also great for them to be around all of their teachers, past, present and future.

“It’s fantastic, the amount of musicianship and mentoring between older kids and younger kids,” she said. “Fantastic — they’re learning so fast.”

Metcalfe said there are students at the camp who are fresh beginners, who spent last year learning how to hold their instruments, sitting alongside upperclassmen, including mentors Wunnyuriti Ziblim, Samantha Adamtsev, Dillon Lukasik, Ryan White and Conner Gelinas. The five are technically interns but referred to themselves as the “cool kids.”

They also had a lot to say about the students they were mentoring at camp.

“It’s been a lot of fun, and it’s been nice to build relationships with the kids,” said Adamtsev.

“It helps the kids who don’t practice,” said Lukasik.

“I feel they have accomplished a lot,” said Ziblim.