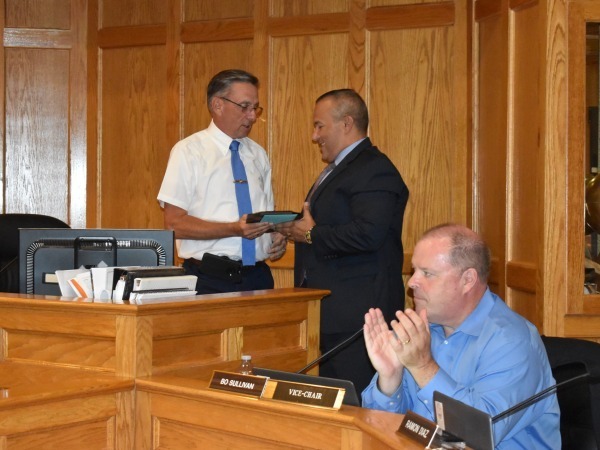 The School Committee honored one of its own on Aug. 29 as members said goodbye to Ramon Diaz Jr. after more than 10 years of service. Diaz is now splitting his time between Westfield and Oklahoma and said he could no longer continue his commitment on the committee.

O’Connor also shared comments about Diaz from former mayors who had served as chairs of the School Committee during their terms.

“I always appreciated Ray’s professionalism and sense of humor. Both traits that were very much needed during the difficult budget years following the 2009-2010 recession. When he disagreed with me or another member, he always prefaced it with what seemed like an apology for not seeing things our way. In the rough and tumble and passionate world that is School Committee policy, his ability to bring humor and an officer’s politeness to the table always went a long way with all of us,” said former Mayor Dan Knapik.

Former Mayor Brian Sullivan said Diaz was passionate about Westfield’s preschool program and brought a high level of professionalism to financial policy, “But what I respected most about Ray was how he defended and stood his ground on topics that might be controversial. He would state his side and research the issue to support his work. He came out ahead many times because of that hard work and pride,” Sullivan said, adding that it was a great honor and pleasure to work with such a dedicated public servant.

Former Mayor Don Humason thanked Diaz for his service to the Westfield School Committee, and said it was a pleasure to work with him when he was mayor.

“He was always very helpful, especially with budget questions and whether or not something needed a roll call vote during our meetings,” Humason said, also citing his commitment and dedication to Westfield schools.

O’Connor added his own praise, saying Diaz has a boundless compassion for student achievement and will “fight his tail off for causes he supports.”

O’Connor also said Diaz has a “special place in his heart” for support services and for the great music programs throughout the school system.

“He has helped to bring technology forward as much as anyone sitting beside him over the last 10 years. He has been a guiding light on financial matters and putting forward multi-million-dollar budgets. He is a kind person, who always shows up with a smile,” O’Connor said, adding, “And if you do find yourself wanting to come back and share any of your thoughts with this group, we will allot you three minutes during public participation.”

School Committee Vice Chair Bo Sullivan said that Diaz was one of the people that asked him to come onto the committee four years ago after the death of his brother Kevin Sullivan. He said Diaz was a big mentor to him, especially in learning the financial aspects of the school budgets.

“For a guy who dedicated 34 years of his life to this country, and almost 11 years to this committee and to the students of this city all the way through, it’s an honor to be sitting next to him and he should be recognized,” Sullivan said.

Diaz was promoted to lieutenant colonel at the Barnes Air National Guard Base in 2016 after 31 years of service. He retired from the Air National Guard in 2019. He now works as a systems architect for Empower, a retirement plan provider.

Diaz thanked the citizens “who had enough confidence in me to vote me into office three times. I hope I didn’t let them down.” He also thanked the previous and current mayors for their mentorship, saying he learned quite a bit from each one.

About his colleagues on the School Committee, Diaz said it is a body that functions because they have different points of view: “It is great to see a body of government that can disagree respectfully with each other for the greater good.” He added that he has been on the lonely end of a 6-to-1 vote more times than he cares to remember.

Diaz said he appreciates all the work his colleagues do and will be one of those watching to see how the committee is going. He thanked Superintendent Stefan Czaporowski, saying he was on the search committee when he was hired, and they got it right. He also thanked the administrators and teachers, saying the committee couldn’t do anything without all of them.

“We appreciate the work you guys do,” he said.

“It’s been a great ride. I’ve had service to the country and to the city since I was 17,” Diaz said, adding later that he grew up in Westfield and attended school here from preschool on.

In making the presentation, McCabe thanked Diaz for his dedicated service to the Westfield schools from January 2012 to August 2022.

After the meeting, Diaz said he tried to execute his School Committee duties with the interest of the students and citizens of Westfield at the top of his mind.

“I am going to miss the work and the difference the committee is making, but mostly the dedicated individuals on the committee, in the administration, and on the front lines with our students,” he said.

Czaporowski added: “It has truly been a pleasure to work with Mr. Diaz over the last decade. Ray is a strong advocate for students and a constant supporter of Westfield public schools. He will be missed.”