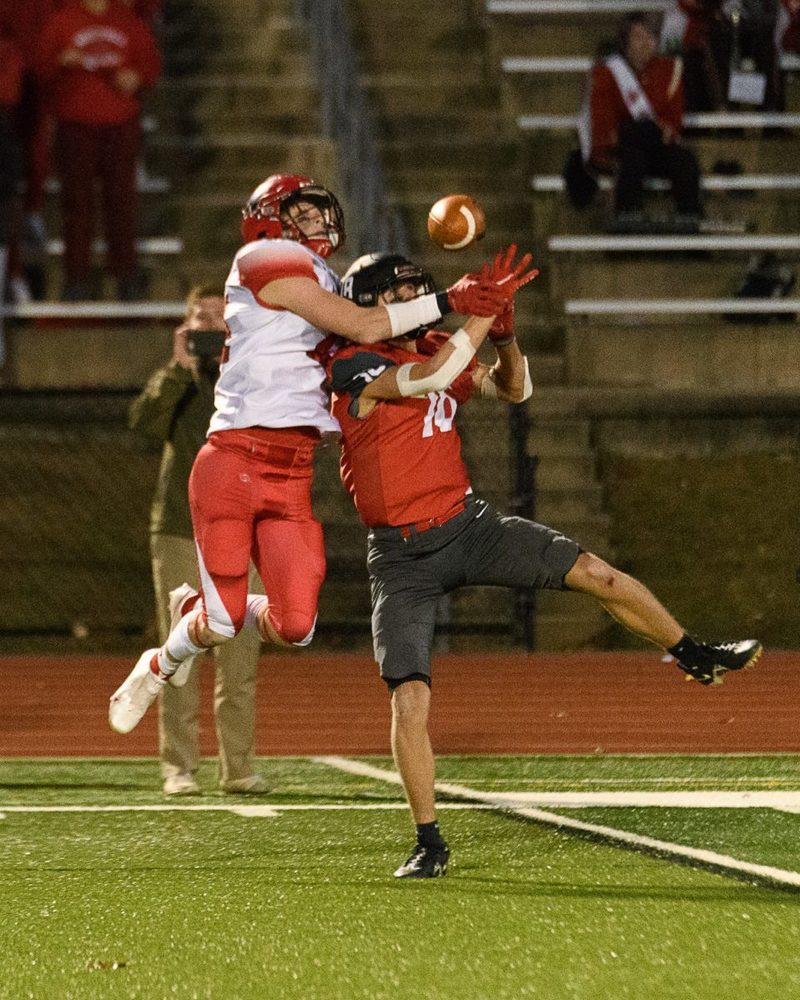 SHREWSBURY – The Westfield high school football team had a magical run this season but it was the Marblehead Magicians who stole the show in the Bombers’ final act.
Marblehead senior Joshua Robertson threw four touchdowns, three of which went to junior running back Connor Cronin, and the undefeated, top-seeded Magicians forced four Westfield turnovers en route to a convincing 40-7 win over the Bombers in the Division 3 football state semifinal Saturday at Shrewsbury High School.

“We were one step slower than we needed to be all over the place,” Westfield High School football head coach Rob Parent said. “I think their offense operated at a pace that we haven’t seen all year and I think it took us a minute or two to get adjusted and then things kind of fell apart late.

Marblehead (10-0) blocked a punt for a safety, recovered two fumbles, and forced an interception. The Magicians scored 19 points off turnovers.

“We played very uncharacteristic,” Parent said. “In these type of moments, everything that you do is magnified. The mistakes we made early in the game really hurt us.”

Westfield’s defense, the team’s strength all season long, showed promise on Marblehead’s opening drive. Matt Collins broke up a Robertson pass in the front corner of the Bombers’ end zone. Ryan Cimini and Andrew Scott converged on a Magicians’ wideout to force an incomplete pass on fourth and goal from the Bombers’ 9. Westfield took over on its own 6-yard line but was quickly forced to punt. Marblehead rushed the punter and blocked the punt. The Bombers pounced on the ball in the end zone, saving a touchdown but allowing a safety.

“The blocked punt – – that’s a huge momentum play,” coach Parent said. “That gives them the safety. That stings.”

After the ensuing kickoff, Marblehead started deep in Westfield territory and immediately scored on a 27-yard touchdown pass from Robertson to senior James Doody with 8:37 remaining in the first quarter. Westfield responded with a five-minute drive that chewed up 51 yards before stalling out at the Marblehead 18-yard line.

Westfield’s defense came to life again when one of the heroes from the previous two games, Tyreek Mejia, sacked the quarterback on a third down play to force a punt. The Bombers fumbled the ball away though on their next possession, giving Marblehead the ball on their own 33-yard line. The Magicians quickly scored on a Robertson 21-yard touchdown pass to Cronin with 11:25 left in the half.

“The fumble to start the next drive after getting the stop and getting the ball back – – that hurts to give them the ball deep in our own territory,” coach Parent said.

Westfield countered with another long, time-consuming drive, moving the ball 64 yards before turning it over on downs. Marblehead took over but Westfield’s defense came up with another big stop. The Bombers regained possession of the ball but the Magicians picked off a Matt Adamites pass. As time expired in the second quarter, Marblehead converted a 23-yard field goal to take a 19-0 lead into the half.

Westfield put together a nice second half opening drive that culminated in an Adamites’ 6-yard touchdown run with 7:59 on the clock. Ian Dixon’s extra point pulled the Bombers to within 12 points of a tie, 19-7.

The momentum quickly expired though as Marblehead drove 59 yards and scored on a Robertson one-yard touchdown pass to Cronin. Robertson rolled out on a play-action pass and spotted Cronin flashing across the end zone for the score with 6:00 remaining in the third quarter. The Magicians led 25-7. Marblehead ran away with the game in the fourth quarter, scoring on a two-yard touchdown plunge from senior George Percy and a long catch-and-run TD from Robertson-to-Cronin. Westfield fumbled late.

“They’re a really good football team,” Parent said of the opposition. “They’ve won 20 games in a row for a reason. They’re a very fast offense; they’re very diverse. Kids can play receiver, play running back – – they move kids around all over the place – – and their quarterback gets the ball out of his hands fast. That’s to be commended. They played great.”

A loss in the Final Four does not take away from Westfield’s glorious season.

“I am super proud of what this team has accomplished this year,” coach Parent said. “It is nothing short of remarkable what we did. We won two games in the spring, had a pretty good summer and then we came out and we just executed the plan week in and week out. These guys found ways to win but tonight we just came up short.”

Westfield found a way to win all season long, defeating Amherst-Pelham Regional, Northampton, Holyoke, Minnechaug, Chicopee Comp and Longmeadow to enter the postseason nearly perfect. Their only regular season loss came against Division 1 powerhouse Central, who is now bound for its respective division’s Super Bowl, following a high-scoring 60-49 win over that tournament’s top seed, Franklin, on Saturday. Then, the Bombers defeated Fitchburg and Plymouth South to earn a trip to the semis.

“I’m still proud of these guys and what they did – – the contributions we got from all classes, seniors all the way to freshmen,” coach Parent said. “Kash Kelly as a freshman today balled out for us. (Freshman quarterback) Jaxson (St. Pierre) balled out for five games for us. Our center, Declan Connally as a freshman played every game this year, every snap. Cooper McNamara, freshman. And then we had a whole bunch of seniors like Ryan Cimini, Nick Bates, Silas Yesu, (Sean) Daly, (Dylan) Arooth, (Connor) Ward. Those guys were committed to it. There was a good balance between the room of some youth and inexperience and some guys who have been out there, been on the grind for a couple years. They just meshed well. I’m super proud of what we did.”

The future remains just as bright going forward with St. Pierre taking over. Jaxson’s older brother, Austin, also a quarterback, led the team to a west sectional title in 2016.
“In 2016, that was the first special team that we coached,” Parent said. “I think this team is equally as special as we had in ’16. I think those guys from ’16 laid the groundwork of how to take the lessons of losing and turning it into the positives of victory. I think in the spring, these seniors showed these freshmen what it was to go back, review the film, get themselves coached up properly and then take the offseason properly. I think that there is a road map of success in this program. I think that the seniors showed the freshmen how to do it and I think the freshmen are very capable of doing it, taking the baton and running with it.”

Speaking of running, the offseason strength and conditioning program is just around the corner.