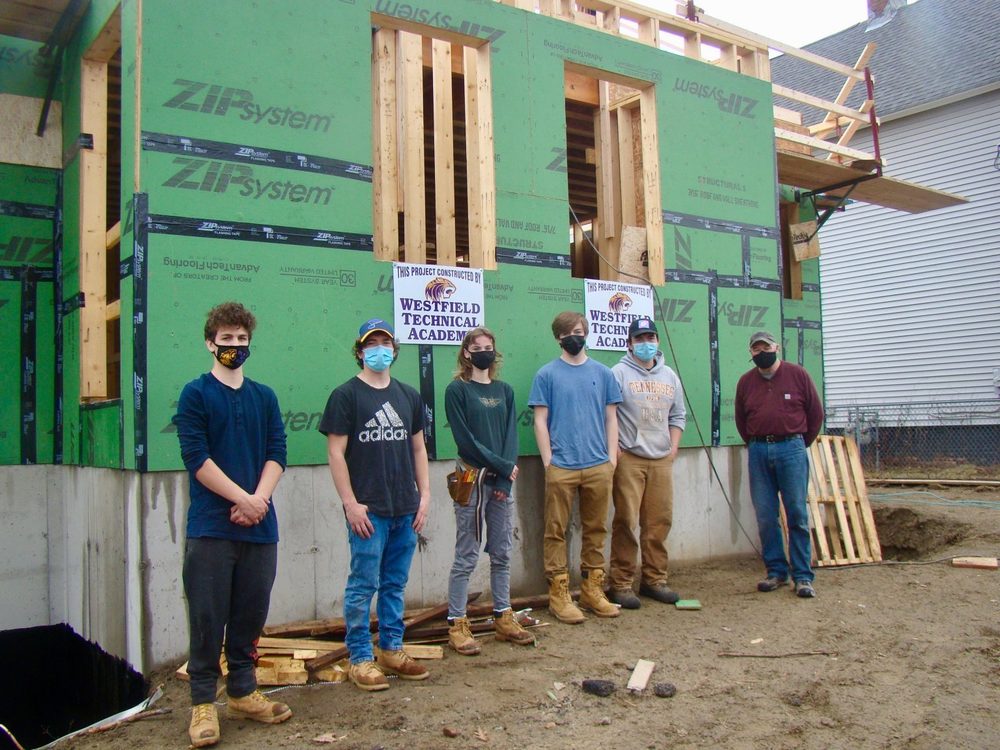 A new two-family home at 8 Lewis St. is going up, thanks to the work of juniors and seniors from Westfield Technical Academy’s Construction Technology department.

A dilapidated house on the property had been previously razed by the city, which sold the property at auction in 2018 to David MacIver and Joseph Tremblay of Westfield for $33,000. A special permit was granted to MacIver for the house build in December, 2018. Construction began in November, 2020.

Construction Tech teacher Matt Gomes said the condex, side by side condominiums, were designed by the school. “It’s going well,” Gomes said.

A crew of seniors was working on the job site on March 25, including Vitaliy Okhrimenko, Matthew Thayer, Aubrey Bryant, Ben Yvon and Cameron Hiltbrand. When asked whether the winter weather had slowed them down, one student said they spent a lot of time shoveling.

Gomes said the project was on hiatus before and after Christmas due to a COVID shutdown at the school, and they are a little behind schedule. He said the second floor walls will be framed over the next two weeks, in anticipation of a delivery of 50-foot roof trusses.

“We’ll have it framed by the end of the year,” Gomes said.

Roy said the students are working with custom pieces in the side by side duplex, with intricate framing on both sides and a fire rated wall in between. He said they were “deep into residential construction” on this job.

WTA Principal Joseph Langone also stopped by the work site on Thursday. “Let’s be honest, the fact that we are able to accommodate a project of this scale with COVID and all the precipitous changes in the economy is no mean feat. None of this could happen without great students, great educators and a powerful community relationship. We’re thrilled to be able to do it,” he said, adding, “This particular project is something we hope to become a regular occurrence.”

“We’ve been standing up houses in this town since the 80’s. Most vocational schools are not capable of doing what we’re doing — they build sheds,” said Gomes.