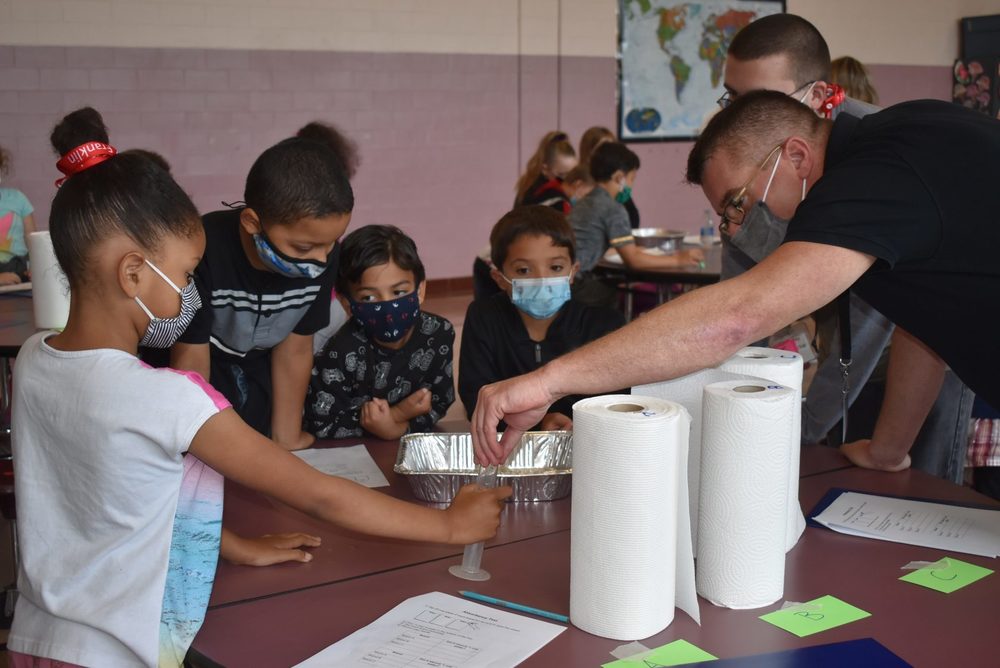 If city students are suddenly talking even more about becoming scientists, technicians, engineers or mathematicians, it could be due to the activities and experiments they participated in during STEM Week from Oct. 18 to 22.

From Westfield Middle School computer science and robotics students visiting Whip City Fiber to find out exactly how the internet works, to Fort Meadow students making a chemical reaction with baking soda, vinegar and water in a pumpkin, students from pre-kindergarten to grade 12 were able to envision themselves in a whole range of careers.

“STEM Week in Westfield was a huge success this year again. The goal of STEM week from the state is for students to see themselves in STEM. In a variety of activities from K to 12, students engaged and succeeded in science, technology engineering and math,” said Westfield Public Schools Science, Technology and Engineering Supervisor Lauren Figy Cadigan.

“I’m thankful for our community being so supportive this week. It would not have been such a huge success without our community partnerships from the Westfield Gas & Electric, Westfield State University and Westfield Education 2 Business Alliance, and all the people that participated in career panels to help our students to see themselves in STEM,” added Math Supervisor Kate Perez.

Dr. Jennifer Hanselman, head of the biology department at WSU and of the Pioneer Valley STEM Network, also brought biology students Josselyn Donahue and Jean Ganek with her to Franklin Avenue Elementary School on Thursday to help second grade students compare and test the strength and absorbency of three popular brands of paper towels.

First the students dampened the towels and started placing pebbles on them, counting as they went. Some towels held over 100. At the end of that exercise, students raised their hands to say whether roll A, B, or C was stronger.

In the second exercise, students poured a beaker of water in a tin and placed one paper towel in, to see if it would absorb all of the water. At the end of both exercises, the brand names were revealed, and Bounty was revealed as the strongest and most absorbent, followed by Walmart and Scott paper towels.

“Keep asking questions, solving problems and looking at the world around you,” Hanselman told the students.

Westfield High School AP Biology students in Kate Pawul’s class prepared science stations for 3- to 5-year-old prekindergarten students at Fort Meadow Early Childhood Center to visit. Students examined the insides of a pumpkin with a magnifying glass at one station, and created art from pinecones, leaves and branches at another. They also ran acorns down mazes, and built bridges with ordinary household objects at other stations.

WHS and Westfield Technical Academy students participated in three virtual career panels with 11 panelists representing all four STEM disciplines, including doctors, food scientists, veterinarians, engineers, software engineers and accountants, who spoke to them about the work they do and took questions.

One WHS student, Ciara Johnson-Corwin, wrote to Perez after the panel, grateful for being able to hear from and speak to a pediatrician at Boston Children’s Hospital, which is her dream job.

“I just want to say thank you so much for having this STEM week because it’s such a great opportunity for all students! I was the person who put in the question about Boston Children’s. It’s so funny because I want to be a pediatrician and I would love to work at that hospital!” Johnson-Corwin wrote. She also asked if she could contact the doctor to speak to the school’s recently formed medical club.

Figy and Perez said they were thankful for the committee of seven teachers, including Fawn Busby, Kasondra Marshall, Kelly Paradis, Megan Hysler, Julie Orzolek, Kate Pawul and Leah Rucki, who gave up their time to be a part of the STEM committee.

“We are very excited to collaborate with so many community partners, including Westfield State University and the Westfield Gas & Electric, to offer real-world and authentic learning experiences for our students during STEM Week and throughout the school year,” said Superintendent Stefan Czaporowski, who participated in many of the events during the week.

“We really want to it continues throughout the year. We highlighted this week, but Westfield Public School District is about STEM all year,” Figy said.