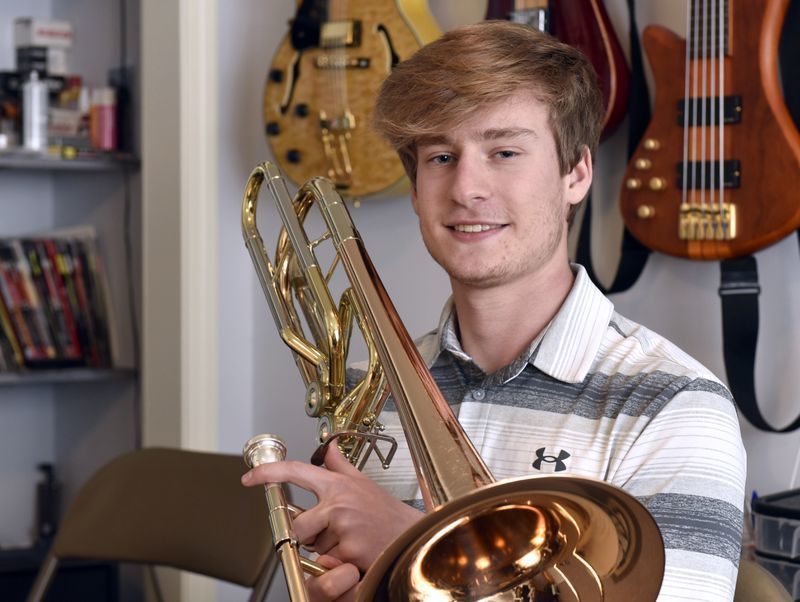 Excuse the over-the-top music pun, but Jay Scherpa is not one to toot his own horn.

“He’s very humble and modest. And very self-motivated,” said Zachary Scherpa, the father of a Westfield High School senior whose skill at bass trombone has made him the best in the nation for his age level, according to the scoring system of a national association.

As his parents describe his path to musical success, Jay sits politely in the family’s living room, giving short but respectful answers to a subject that is clearly not his favorite: himself. His enjoyment of music, though, shines through.

“My favorite part of music is creating it. I play a lot of instruments, almost anything, but trombone is probably my favorite,” the 17-year-old said.

The rating system of the National Association for Music Education is based on a step-by-step series of district, state and national performances. Many are done virtually, as was made necessary by the COVID-19 pandemic. Jay’s presentations on the national level in October were done that way as well.

Throughout high school, Jay has gone up the ladder from all-state status, which he attained as a freshman, to national recognition. He holds the only bass trombone spot in the National Symphony Orchestra, an all-star cast of teenagers who have performed live concerts in the past.