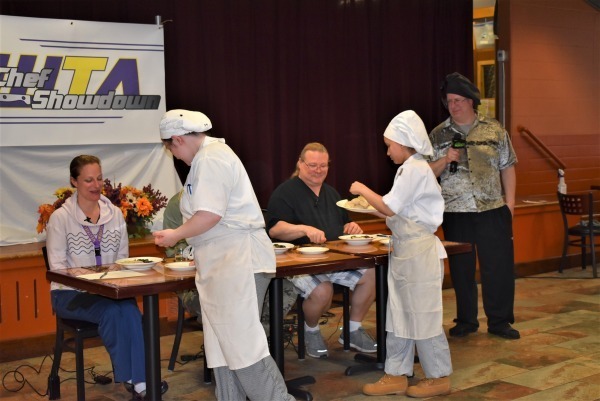 “It was a big collaboration,” said Westfield Technical Academy (WTA) senior Will Laprise who, along with digital media classmate Emily Acosta, conceived and directed the first televised WTA Chef Showdown with students from the culinary arts shop, hosted by Harry Rock and Chef John Slattery.

The competition, which was recorded on May 2 and 3, will be aired on Westfield Community Television on a date to be announced.

Laprise said back in September, he and Acosta were working on ideas for a capstone senior project that would employ all the electronic media skills they’ve learned, and on a whim he came up with the idea of doing a cooking show with the school’s culinary arts program, which they pitched to arts and communication teacher Steven Forni.

“Then [Media Specialist] Peter Cowles heard about it, and thought it would be fun to broadcast. We wrote up the outline, how it would go, the style, and most of the dialogue,” Acosta said. Cowles supplied all the equipment they needed.

“It was collaborative work. We took turns directing, figured out where to set up the cameras and judges, and set deadlines,” Laprise said. Next, they will edit the segments to air on Westfield Community TV and on the WTA Facebook page.

Besides the digital media students, who have been meeting weekly and working since September on the project, the culinary arts students also had to get on board. Chefs Philip Mucciarone and Eric Rogers of culinary arts were fully behind the concept.

“It was fantastic. The kids really owned it – there was more communication than I’ve seen all year. They really owned it,” said Mucciarone about his students, while acknowledging the organizing done by digital media students.

On the first day of competition on May 2, two teams of six, Team Purple and Team Yellow, prepared dishes with pork tenderloins, two sides and a confection.

Slattery narrated the process in the kitchen and described the dishes being judged. In the kitchen interviewing the student chefs was student host Elena Gavrilova.

The dishes were judged on presentation, plating, taste, temperature, texture, cleanliness and creativity.

On the second day of the competition, May 3, the winning team from the first round would compete individually with assistance of a member of the second place team in a grilled cheese challenge. The top two pairs then faced off in the final round on the same day, preparing filet mignon and two sides.

Both Forni and Mucciarone were proud of the effort put in by their students. Forni said there was still a lot of work to do with the editing.

“We’re hoping it goes well, and we can do it every year,” he said.

“This would be great to do on a yearly basis,” agreed Mucciarone.