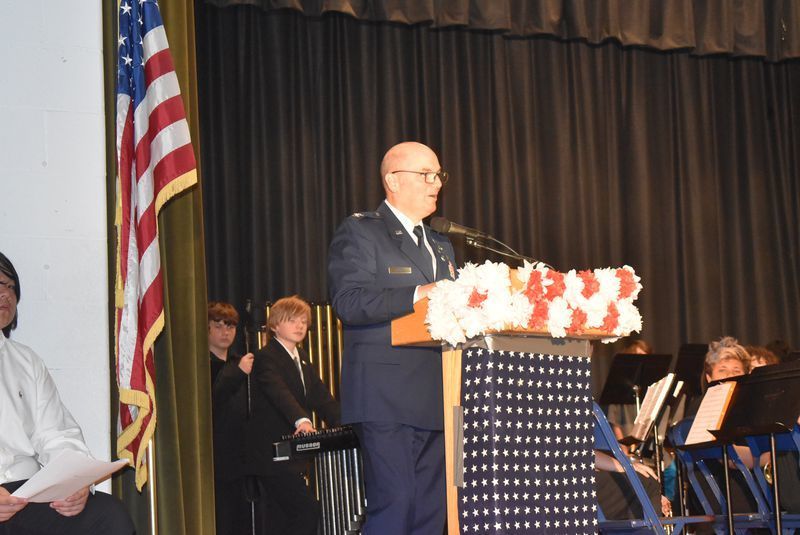 Westfield Middle School held a solemn Memorial Day assembly in the auditorium on May 27, returning to a tradition of 53 years that had stopped due to COVID-19.

All 800 students at the school were in attendance, giving their full attention and due to every speaker and performance.

Eighth grade masters of ceremonies Jonah Imbriglio and Andy Liu reminded students that Memorial Day honors those who gave the supreme gift of their lives so we can be free. Liu said Parker Memorial Park, across the street from the school, which has veterans monuments going back to the early days of this country, is a daily reminder of their sacrifice.

Honored guests were Mayor Michael A. McCabe; state Rep. Kelly Pease, himself a retired Army officer; and veterans who had been invited by student family members at the school. Before the assembly, eighth grader Ariel Lusby met her grandfather and Vietnam veteran Paul Seery in the library. She told Seery that she would be performing all three verses of “America the Beautiful” with the chorus for him.

The middle school band also played patriotic selections throughout the program. During the program, a sole trumpet player sounded taps in honor of the National Moment of Remembrance.

Retired Air Force Col. Patrick Dufraine, who teaches science and robotics at the school, related a moving story about his service in Afghanistan during Operation Enduring Freedom. He spoke about five servicemen and -women who lost their lives, and said, “Every morning when I raise the flag, I have my own Memorial Day and thank the five for their service. Raising my flag allows them never to be forgotten.”.

The students followed the color guard, U.S. and state flag bearers and the veterans out of the auditorium after an impressive gathering, their first as an entire school assembly since the pandemic began.