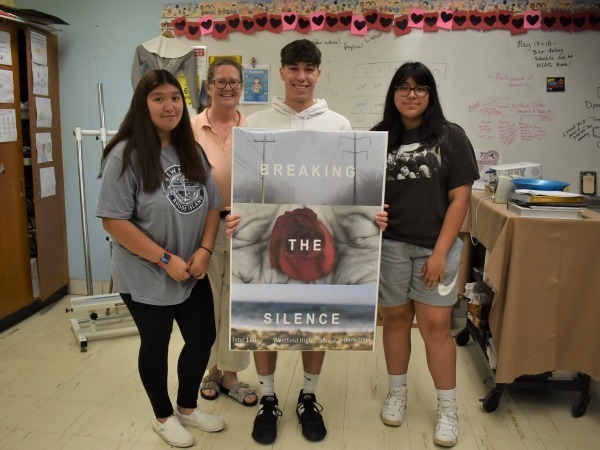 A project that began three years ago with Westfield High School (WHS) English teacher Kristen Biancuzzo and students in Westfield Promise is about to culminate in the premiere of the original documentary film “Breaking the Silence,” about the opioid crisis and its impact on the Westfield area.

The film will be screened on June 11 at Westfield High School, 177 Montgomery Rd., Westfield. The event begins 6 to 7 p.m. with an interactive art display in the cafeteria featuring live music and hors d’oeuvres; at 7 p.m. the film will be shown, followed by a panel discussion. There will be helping organizations on hand with information, and a luminaria lighting as people leave.

“It will be a big event – it’s not just the film,” said Biancuzzo.

Juniors Layla Bermejo-Verdugo, Tanya Castillo, Cailyn Crean and Ian Soto are all project spokespeople who are creating and marketing the film premiere.

“We are raising money to raise awareness of the opioid crisis that keeps rising every year,” said Bermejo-Verdugo.

Although there will be no charge for the film event, donations are welcome. Biancuzzo said the group needs to pay back some expenses for the project, and any donations over that will go to one of the local organizations that works to help stop addiction or help with mental health issues.

There will also be a fundraiser to raise money for the premiere at the Maple Leaf Pub, 11 Arnold St., Westfield, on June 7 from 5 to 9:30 p.m., featuring trivia, raffle prizes and a 50-50 raffle.

Bermejo-Verdugo said she recently had a table at the WHS Craft Fair about “Breaking the Silence,” that also offered pony rides.

“At the craft fair, I took advantage of the opportunity, and felt connected. I talked to people about loss. It was just really meaningful. This is a small town – they could be our neighbors. We don’t know their stories,” she said, adding that she hadn’t expected to have people come up to her and told her their stories.

Soto said many students in the class are helping to make luminaria bags and purple and silver ribbons for the event. The purple stands for opioid addiction awareness, and the silver for fatal and non-fatal overdose awareness. Together, they stand for International Overdose Awareness Day.

Soto said he didn’t know much about the project coming in, but he volunteered to help, because he wanted to help “Ms. B,” because of everything she does for them.

“The more we help her with it, the more emotionally involved we become. Finishing it is helping everybody,” Soto said.

“It breaks the stigma around addiction. Moving it more towards a positive, saying ‘you’re a fighter,’” said Castillo.

“It’s a powerful project that because of COVID was put on hold. The event brings the project full circle, even if we didn’t work on the film,” Soto said.

Westfield Promise students have spent the past three years interviewing and filming people in greater Westfield regarding the opioid crisis and its impact on the city, the group said in its invitation to the premiere.

“We understand that everyone is touched by this epidemic and our goal is to help educate young people about the dangers of addiction but also to provide them with answers and resources to help them stop,” read the invitation.

Westfield Promise is a dual-enrollment program in which Westfield State University faculty co-teach what is known as a “stretch year” course with the high school faculty to high school juniors. The program provides high school students, many of whom would be first-generation college students, with an early exposure to university-level study. In their senior year, students take classes on the WSU campus, earning them college credits.

Biancuzzo said all of the students who worked on the film project over the last three years started in their junior year in Westfield Promise. Service projects are outside of the class requirements. She said this year, Hermansen is working with the students to help them to organize fundraising around the film’s opening.

The first service project Biancuzzo did with Westfield Promise was the mural “Eyes on Westfield,” which her students painted on the side of the Food Pantry building on Meadow Street in 2018, in collaboration with art teacher Karen West’s class. The mural was based in part on a drawing by WHS student Lily Anderson, who died of a heroin overdose in 2016.

Biancuzzo said the film has taken a lot more time. The first year working on the film, students interviewed people in the community who had been impacted by drug addiction.

One of the people they interviewed for the film was Kathi Cotugno, coordinator of CORE (Coalition for Outreach, Recovery and Education) of Greater Westfield. Cotugno’s son Adam died the same weekend as Anderson in 2016. Cotugno said since 2016, there have been 81 deaths by overdose in Westfield.

Cotugno has remained involved with Westfield Promise, bringing information and resources to the students. She will also be on hand with information at the film’s premiere, representing one of the agencies helping to overcome addiction that will be available after the screening of the film.

She said the service projects have offered the kids support and understanding. She was there the day that Biancuzzo and her students were outside, and she asked them to raise their hand if anyone in their family had been involved in opioids, or if they had lost anyone.

“Every student raised their hand. These kids know it’s a problem,” she said.

Cotugno said one of the projects they did in the very beginning was Narcan training with help from Tapestry and the Gandara Center. They opened the classes to the whole school, and parents signed permission slips.

Then COVID-19 came, and the group couldn’t gather in person anymore.

The second year of the project, the brother of one of the students in the class died of an overdose. His sister, Kassidy Saunders, became a narrator on the film to share his story.

A group of students wrote music for the film, which has all original music in it. Alyssa Soto, who graduated last year, wrote a song over the summer of 2020 called “Rescue Me,” which is featured in the film. Also featured are original poems by other students.

Cotugno said students who worked on the film in 2019 are coming back for the premiere.

Biancuzzo said she hopes that it will be a big red-carpet event with a lot of paparazzi. She also said they couldn’t do any of it without the support of Westfield High School Principal Charles Jendrysik.

“It’s obviously very easy to support this. Our students and teachers have put a lot of work into this. I know this will be a powerful and meaningful night,” he said, adding, “This is a project that’s bigger than Westfield High School. It’s important to the community.”

The film’s main narrator is Anthony Rivera. Filmographers were Nathan Dion and Lindsay Dion. All three graduated from Westfield High School in 2019.