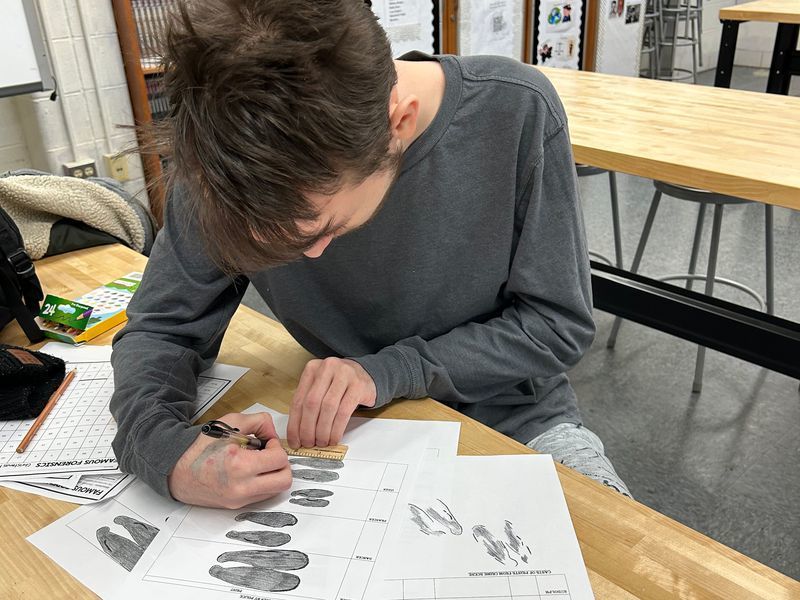 Students in the criminal justice pathway at Westfield High School were recently asked to solve an age-old holiday mystery: which reindeer ran over Grandma?

“We have been studying criminal investigation, evidence collection, etc., and I was looking for a fun way to incorporate what we have learned into a hands-on, holiday-themed assignment,” said criminal justice teacher Kara LaValley.

The facts: A neighbor in Santa’s Village found Grandma laying in the snow at 9 p.m. on Christmas eve.

“We said ‘goodbye’ to her after our family party and she headed home using the back path through the woods. At 8:55 p.m. a neighbor heard a commotion and a scream outside. When she looked out the window, she saw a flash of green on what looked like a reindeer. After putting on boots and going outside to check it out, she found grandma lying in the snow.”

“The kids were pretty quick to figure out that some of the reindeer were female and had significantly smaller hoof prints. They quickly eliminated a lot of the male reindeer and started comparing female prints and cross-checking the prints with the alibis,” LaValley said.

“Once they collected all of the evidence and alibis, they were able to determine that it was Vixen that ran over Grandma. Her hoof prints were a perfect match, she had a green collar, and she had a weak alibi. She stated she was home alone but did not answer the phone during the time when Grandma would have been hit,” she added.

“The assignment was a great way to put our investigative skills to the test,” said senior Kaden Bush.

“The reindeer assignment helped me to not jump to conclusions when reading a case, because you could miss some crucial information if you just go with your first instinct,” added senior Rhea Collingwood.

Sophomores focus more on the corrections system, the differences between jails and prisons, programs offered to inmates, the difference between probation and parole, and opportunities that are available for people upon release.

“We also focus on the differences between men and women in prison and the impact that mental health has on the prison population,” LaValley added.

LaValley said whenever possible, guest speakers and field trips are incorporated into the program, to make the topics as real as they can for the students. The seniors will also be learning career readiness skills through the Career Center and will shadow people who work in the field, or take on internships themselves, towards the end of the school year.

Westfield hopes to establish the criminal justice pathway as a state-certified Chapter 74 vocational program, according to Superintendent Stefan Czaporowski.